On our way up to the Rose Garden in Bern, we needed to stop and look at a map. Maybe we were just out of breath and tired but luckily we stopped on a corner in some shade. We were walking up a steep cobblestone street that didn’t have sidewalks so the corner seemed like a good place to pull out the map. Right after we stepped there, a bike went flying by us and straight into a garage door. It was honestly like a crash dummy video where they see how much impact a body can take with certain amounts of force…except this was a real person going maybe 30 to 40 mph.

I have never seen a person crash so hard into anything. He wasn’t wearing a helmet and lucky for him he ran into a wood garage door instead of the hard stucco house. His front tire hit first and then his head and he just bounced so hard off the door and on to the ground. His head was bleeding instantly and he had two huge knots on his forehead. The cut was above his eye and his lip was huge. His shoulder was badly bruised and his knee was bleeding.

We asked if he was OK, and he said he was. He got up and was going to get back on his bike. We told him that he couldn’t go on like that. He had blood everywhere. We said he thought he needed a doctor, and he kept asking us if we were sure he should go to the doctor. I was tempted to call the ambulance from my phone but I had no idea where I was in the town not to mention I didn’t know the number. A car drove by and the kid in the front seat noticed what was going on. A minute later the mother from the car and her two sons came down to help us. She called the ambulance, and we waited there with him. Seemed like an eternity for the ambulance to get there. They checked him out, took our statement and then took him away. The lady that helped us told us that bikes weren’t allowed on that road and that two years ago somebody had died. We very easily could have been hit if we didn’t stop to look at the map.

I didn’t take any pictures of the poor kid (21 years old), but here is one of the ambulance before they left. I hope that he is doing better today and that he remembers where he had to leave his bike. 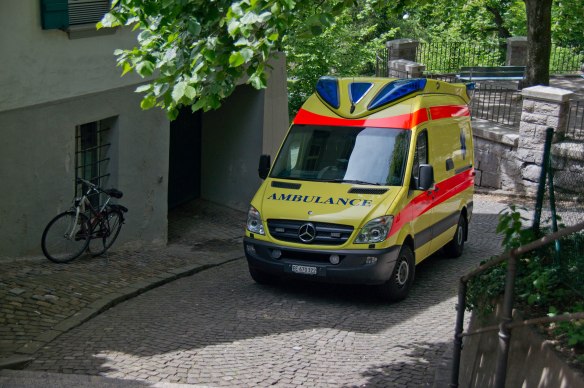